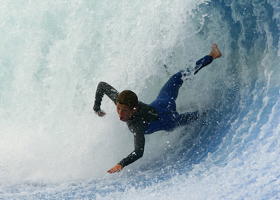 On Buzzfeed, Andrew Kaczynski reproduces pages from About Science 5, a fifth grade science textbook used in some Louisiana public schools, which teaches Biblical creationism alongside of evolution as the origin of life. As the publisher’s page says, “Science 5 focuses on man’s use of God’s creation and design.”

Here Is What Louisiana Schoolchildren Learn About Evolution

It’s not a wipeout if I simply believe I am really flying!

Look, facts are not a belief. They do not depend on a belief system. They help us build models of the natural world that have helped mankind survive and dominate for thousands of years.

We would not be alive today if belief was all that mattered.

According to this textbook, the age of fossils is just a belief. So too is man’s origin or even the Earth’s. Mankind’s place is the world is simply a belief, as is every animals place. It can be a Christian’s belief or an evolutionist’s.

Simply what one believes. Wonderful.

So believing one can fly by wishing it so is every bit as valid as the weight of water about to hit the surfer?

Look, scientists have the views they have because they ACKNOWLEDGE facts. If you do not like a fact, you cannot simply refuse to believe in it. Not if you want to live in a reality-based world.

People who live their lives totally in a world of ‘beliefs’ without any consideration for reality live in Cargo Cult Worlds. If they live very long at all.

The people who wrote and use this book inhabit such a world, one that is largely disconnected with the real one most of us inhabit.

Let me make a point about how biased this supposed textbook is. Besides setting things up as either right and wrong,  it even gets its facts wrong, creating straw men arguments in its prejudice.. No evolutionist  sees the Earth as millions of years old or that man is the highest level of animal. What the heck are different kinds of life ? Earth is a result of a sudden explosion?

The Earth is billions of years old and evolution is not deterministic – there is no highest level of anything. We know of only one kind of life on Earth, based on the replication of nucleic acids through a mutable process under the pressure of natural selection. Earth was only indirectly formed by a sudden explosion, coming into being billions of years after the formation of the Universe by the Big Bang. This is like saying I am a result of a sudden explosion. Only in the most indirect fashion is that true.

This textbook was written by people who had some belief they knew what an evolutionist’s view would be, but only an evolutionist as described by a creationist. They obviously did not try and talk with a scientist to get an unbiased view.

That would mot likely have damaged their finely constructed Cargo Cult World.

Is this  Cargo Cult World that even many Christians want to inhabit?

Aside from the totally despicable view that all Christians believe the same thing and that all students in public school are Christians, this activity either indoctrinates students into a Creationist point of view or, ironically, demonstrates just how lunatic a literal reading of the Bible is. There are no other choices provided.

The same teachers that so many people believe are not capable of teaching math or reading? Yet these same parents are happy with their teachers providing religious teachings regarding the children’s faith?

As a scientist, I’d be down to the principle’s office over this. Not only because of its factual errors but because it encompasses a view of Christianity which is simply wrong. Will many Catholics be upset when their child comes home exclaiming how Young Earth Creationism and the literal word of the Bible are the tenets of all Christianity?

Are we now to suppose that there are only two views – Christian and non-Christian? How un-American!

One thought on “Creationism now taught as science in public schools. And boy is it dumb.”