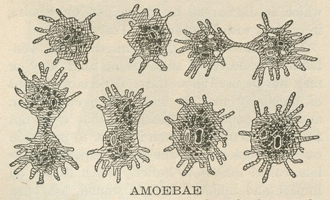 Earlier this year, a 17-year-old French woman arrived at her ophthalmologist with pain and redness in her left eye. She had been using tap water to dilute the cleaning solution for her contact lenses, and even though they were meant to be replaced every month, she would wear them for three. As a result, the fluid in her contact lens case had become contaminated with three species of bacteria, an amoeba called Acanthamoeba polyphaga that can caused inflamed eyes.

The mystery of the woman’s inflamed eyes was solved, but Bernard La Scola and Christelle Desnues looked inside the amoeba, they found more surprises.

It was carrying two species of bacteria, and a giant virus that no one had seen before—they called it Lentille virus. Inside that, they found a virophage—an virus that can only reproduce in cells infected by other viruses—which they called Sputnik 2. And in both Lentille virus and Sputnik 2, they found even smaller genetic parasites – tiny chunks of DNA that can hop around the genomes of the virus, and stow away inside the virophage. They called these transpovirons.

This is a fascinating story. They discovered an amoeba in the eyes of a woman. Inside that amoeba was a huge virus – which had as much DNA as some free-living bacteria. In that virus’ DNA was another virus. And inside the DNA of that smaller virus were small pieces of DNA that could move around, ‘infecting’ the DNA of other viruses, such as Sputnik 2 and Lentille.

The amoeba is called Acanthamoeba polyphaga. The large virus is called Lentille. The small virus in Lentille is called Sputnik 2, a virophage. The small pieces of DNA – about 7000 nucleotides long – are now called transpovirons.

One of the fun things about discovering new stuff is getting to name them.

Transposable elements – small pieces of DNA that code for proteins that assist in their own movement throughout a genome – have been known for 60 years or so. But this is the first time anyone has demonstrated that they can be found in viral DNA. Thus the name transpovirons.

They contain the gene sequences for proteins that will excise them from any of the Sputnik DNA. They can also be replicated independent as free molecules. So much so that inside the Lentile virus particle, they can represent 3-14 times more DNA than the entire virus genome.

And Sputnik 2 – about 18,000 nucleotides long –  is a new type of virus that infects other viruses. We have know about viruses that infect bacteria for a long time. They are called bacteriophages. Now we have viruses like Sputnik 2 and we will call them virophages. (As an aside, I’ve worked with bacteriophages and we always just shortened that to phages. Now we will have to use the whole name. Sometimes science makes things inconvenient.)

All inside an amoeba that ended up in someone’s eye.

You can read the paper for free. I think the title “Provirophages and transpovirons as the diverse mobilome of giant viruses” is just too stiff. I’d prefer something like “There’s a transpoviron in the provirophage in the giant virus of the Mimiviridae family in the amoeba Acanthamoeba polyphaga in someone’s eye”

Okay, doesn’t work as a lyric and perhaps too long but I like it.