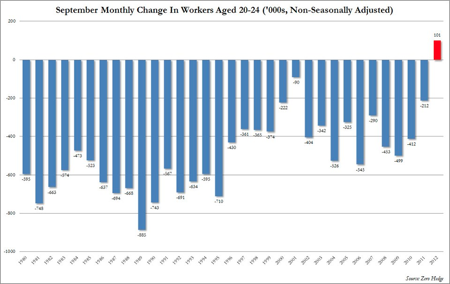 I’ve seen this around the internet as though it is some sign that that the BLS numbers are suspect.

But I always get curious when I see such an odd chart – only those 20-24, non-seasonally adjusted numbers and only looking at single months over the years. What a weird chart. Humm. So I took a little deeper look.

Let’s do the same thing but for the August Monthly Change in Workers Aged 20-24(‘000s, Non-Seasonally adjusted)

Here is what we get: 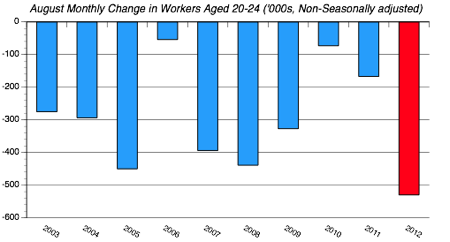 It turns out that if we examine the July-August differences for ages 20-24 rather than the August-September differences, we find that August 2012 saw the greatest monthly decline in jobs for ages 20-24 seen in the last decade, 530,000 fewer,  almost 100K less than any other year.

Now did anyone see this numbers as worrisome last month. The greatest decline ever?

I call cherrypicking, which is why such an odd bit of data was used. It turns out that one reason the numbers are seasonally-adjusted is due to college students going back to school. People aged 20-24 artificially inflate employment members at the beginning of summer and deflate them at the end of summer, which is one reason the raw numbers are not used and they are seasonally adjusted.

So that explains why the chart used such an odd measure. These are numbers that are already somewhat wonky BECAUSE of what this age group does.

And, as I wrote earlier, it looks like more of these people went back to school in August this year than usual and fewer did  in September. This change in routine would certainly throw off the numbers and explain why August was worse than normal and September was better.

Then add in that these household surveys have significant errors due to sampling, errors that are worked out as time goes on. These numbers from August and September are  preliminary. They are the best we get from this survey this early and that is why they are revised.

This is one reason people simply should not put much faith in these early numbers from the household survey. But they do. If these numbers had been bad, Romney’s side would be running on them. Since they are good Obama’s side will use them.

The survey that provides the unemployment data is usually much better because it is a much larger survey. Those numbers are much more reliable to discuss this early.

Check back at the end of the year. They will have a much better idea of the real numbers.