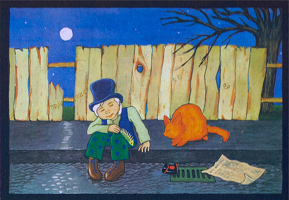 Reality 2.0 was my original blog: a pile of stuff I wrote before there were blogs. All of it is old now, but some of it still rings new. Since Reality 2.0 is deep in the Searls.com basement, I’ve decided to surface some old pieces that might be interesting, for whatever reason. The one below was first written on April 16 1998, about a year before Chris Locke, Rick Levine, David Weinberger and I put up The Cluetrain Manifesto, and updated one year later to recognize Cluetrain’s successful launch on the Web that month. It was still nearly a year before Cluetrain appeared in book form, and a decade before the 10th Anniversary Edition.

Never mind that Lycos, HotBot, Tripod and WhoWhere are blasts from the past. Note instead that these are zombies that were once hot stuff, and led by CEOs that talked very much like the CEOs walking around today. Note also how little progress we’ve actually made toward Cluetrain’s ideals.

Bob Davis is the CEO of Lycos, Inc., whose growing portfolio of companies (excuse me, portals) now includes Lycos, Hotbot, WhoWhere and Tripod. I’m sure Bob is a great guy. And I’m sure Lycos is a great company. A lot of people seem to like them both. And you have to admire both his ambition and his success. To witness both, read his interview with PC Week, where he predicts that the Lycos Network (the sum of all its portals) will overtake Yahoo as “#1 on the Web.”

Lycos will win, Davis says, because “We have a collection of quality properties that are segmented into best-of-breed categories, and our reach has been catapulting.”

I can speak for Hotbot, which is still my first-choice search engine; but by a shrinking margin. I often test search engines by looking for strings of text buried deep in long documents on my own site. Hotbot always won in the past. But since Lycos bought it, Hotbot has become more of a portal and less of a search tool. Its page is now a baffling mass of ads and links. And its searches find less.

Why? Bob Davis gives us a good answer.

“We’re a media company,” he says. “We make our money by delivering an audience that people want to pay for.”

Note the two different species here: audience and people. And look at their qualities. One is “delivered.” The other pays. In other words, one is cargo and the other is money.

Reading the Cluetrain Manifesto was one of the pivotal points in my life. I remember crying in an airport terminal because it was describing the world in terms that told me others thought  like I did.

I was not alone.

I remember using Hotbot as my go to search engine, until it fell behind, just as he described.

I liked Excite, even using them for an email address that I still have. (I stopped using them as a search engine when they were bought out, like Hotbot.)

Google arrived and changed things. It seemed to have caught the Cluetrain but recent  events suggest that it may have fallen off the train somewhere along the way.

Apple did eventually board the Cluetrain and it has become the largest high tech company ever.

But follow what hapened to SOPA/PIPA and you see what appears to be a lot of people who are on the Cluetrain and whose voices for the first time rattled the walls of the media in the same way Howard Beale asked.

The media’s response has been fear, even threatening the President of the US with the withholding of funds. They do not realize that the President could probably easily say goodbye to their few millions and hello to tens of millions more from those who are on the Cluetrain.

The political force that pushed back against SOPA/PIPA, its ad hoc nature and its inability to be directly attacked, mirror such diverse things as OWS, the Tea Party and the Arab Spring.

Communities of interest can come together rapidly and exert a force that overcomes mere money. They can then disburse, becoming impossible to co-opt or destroy.

The old Powers only hope was to control and contain the benefits of the Cluetrain, but their attempts to do so were so rapidly confounded that I do not see this happening.

President Obama had over 100,000 signatures on petitions dealing with SOPA/PIPA from his transparent petition website – We the People – in less than 2 weeks. They had to respond by their own rules or risk showing their site as a sham – not smart to do in a political year like this one.

Their response generated even more momentum and you saw politicians heading for the hills as fast as possible.

They will not know what to make of this. The corrupting influence of money on our politics requires a citizenry who is asleep.

The Internet makes this not only much less likely but also provides the tools to let the politicians know when we are mad as hell and just what we can do about it.

I imagine a whole bunch of them will be retiring now since actually doing the people’s work is not as lucrative as getting money from lobbyists.

Then maybe we can actually get more politicians who have a clue.