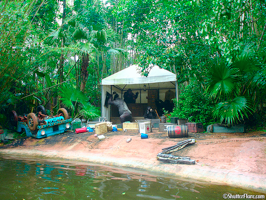 WTF is happening with SOPA now?
[Via Boing Boing]

If you followed my tweets from the markup session for SOPA in the House of Representatives, you know how frustrating it was to watch: you had these lawmakers blithely dismissing the security concerns of the likes of Vint Cerf, saying things like, “I’m no technology nerd, but I don’t believe it.” In other words: “I’m a perfect ignoramus, but I find it convenient to disregard the world’s foremost experts.” Another congressman from Florida kept saying things like “No one can explain to me how this bill harms political debate or academic freedom.”

SOPA is a horribly bad bill. The Congressmen dealing with it feel perfectly fine ignoring what experts say. This is the perfect description not only of this particular issue but of all of Congress’s legislation.

I think I’ve got the perfect metaphor for the hearings: there’s a scene in the Disneyland Jungle Boat Cruise where you pass the “gorilla camp,” in which a tribe of gorillas have taken over an explorer’s camp, upending the jeep and taking deadly possession of the firearms. One gorilla is staring up the barrel of a rifle, while another is firing a pistol into a collection of floating explosive barrels in the river.

That image is what I keep returning to as I listen to committee members blithely dismiss the experts who warn that this bill will undermine civic debate, academic freedom, and the security of the Internet. Of course, these are the same committee members who refused to hear testimony from the bill’s opponents.

A bunch of gorillas acting like the understand what they are doing as they destroy civilization.