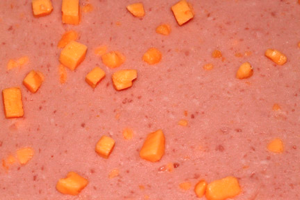 U.S. Customs and Border Patrol officers intercepted 385 pounds of Mexican bologna after finding the contraband luncheon meat behind the seat of a pickup truck stopped at the port of Santa Teresa, New Mexico, last Friday. I wonder how they sniffed that one out. Guess the smuggler didn’t do a very good job of hiding the salami, so to speak.

The worry is that since pork is used in the bologna that there could be nasty parasites and stuff in the meat. Could well be true which is why I always choose name brands with my processed foods.

Then if I develop food poisoning and die, my heirs have someone to sue.

Of course, the real purpose, as some of the commenters mentioned, might be that bringing in a smelly meat just before the weed truck can mess up the dog’s sense of smell. Perhaps enough to get the truck through.

I wonder if that is true.