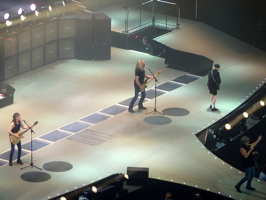 AC/DC Says Their Songs Will Never Be Available For Download; Rest Of Internet Laughs
[Via Techdirt]

Capitalist Lion Tamer points us to the news that the band members of AC/DC are standing firm in saying that they will never allow authorized versions of their music to be sold online for download. The logic here seems to be entirely lacking. The band claims that it’s because they want people to listen to the whole albums, not just tracks, but if that’s the case then they should just release the whole album as a single track. The fact is that anyone who has their albums can choose to listen however they want. And any time one of their songs is played on the radio, only one song is heard — yet you don’t hear them talk about boycotting radio. But, of course, the bigger issue is that it’s silly to not offer an authorized way for people to pay you for your music, when the alternative that plenty of people will choose, instead, is to simply download unauthorized versions where the band has no say at all.

“We will never allow our music to ever be digitized. Cassettes are good enough and should be the only way to listen to our music.” We would laugh if this was being said. Yet, here is AC/DC.

AC/DC has written some great rock anthems but saying they will never be individually available for download? I know several albums on iTunes that require you to purchase the whole album – if that is really what they want.

But they apparently only want people to access their music through CD players.

However, the presence of a CD player is becoming less universal. No CD player on a iPad, iPhone, Apple TV, Macbook Air, etc. Apple is driving things towards a CD player-less world.

And with the continuing decline of CDs, what do they propose people use to get their music in a few years? All they do is drive people to get this music in ways they have no control over.

I always wonder about the use of copyright to prevent people from being able to access works that are not available in a legal fashion. An out of print book can not be copied because of copyright but is not accessible to anyone else because the copyright holder refuses to allow it.

It seems to go against the purpose of copyright to prevent the dissemination of works but then I guess the holder has absolute control. If AC/DC only allowed wax cylinders to be the way to access their music, they seem to have that right.

Since the purpose of copyright is a contract for the betterment of both authors and society, this approach has no benefit to either. So why is it  allowed?