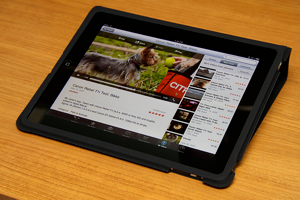 The blistering pace of graphics performance improvements on Apple’s iPad 2 will enable a new class of handheld gaming titles, but Android devices aren’t likely to get the same kind of attention due to platform fragmentation, says Epic Games’s Tim Sweeney.

Games drove cutting edge hardware with computers and it seems they will with tablets also. People who pooh-pooh tablets forget just how good they can be as gaming machines, machines you can carry around with you. Gaming machines that allow you to read email, surf the web and edit movies. All while you move around.

The guy from Epic mentions how Apple increased video output almost 9-fold in a year. It takes dedicated gaming machines maybe 7 years to do that. As gaming developers take advantage of this, I expect the iPad to be a hotbed of great new games.

Not only will Android fall behind because of hardware design but also because of fragmentation of the market. A developer will not really know what the hardware, memory or even OS will be for a particular user. Mnay developers will create the best games for the fastest hardware, which also happens to have nonr of the problems of fractionated markets.

As he stated, Epic is focussing on iOS because “it’s really the best place to make money.”

2 thoughts on “Apple is “the best place to make money””