The Democratic congresswoman from Arizona was shot along with several others at a public event at a grocery store, according to her spokesman. The Tucson Citizen reported that Ms. Giffords had been shot at close range in the head.

I hope this was not an assassination attempt. But with so many unbalanced people out there, and with such stunning rhetoric going on – Sarah Palin had a website where the crosshairs for a telescopic sight were placed on Giffords’ district – my worry is that this shooting was directed at Giffords.

What does a simple examination of the imagery suggest should be done to prescribe the solution? 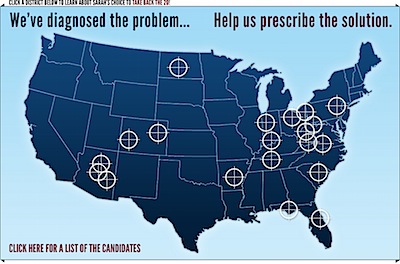 Palin’s site has since been taken down and now simply redirects to her PAC. Good. Perhaps putting sniper sights on political foes was not a good idea.

There is a lot of heated rhetoric out there, about how this is the end of the world or the worst ever, and how we need to examine 2nd Amendment remedies. The people who spout this, who demonize their foes. use violent images and promote violent solutions, may have some responsibility in this.

They need to stop.

UPDATE 1: The supposed gunman, Jared Lee Loughner, has a youtube site where he has videos that talk about the illegitimacy if the government, terrorism and some weird stuff about dreaming and mind control. Definitely a whack job. And, wow he already has a wikipedia page.

UPDATE 2: Now getting more information about the other victims. At least 5 dead including a young child. Glad to see that bystanders stopped him. I’m not a big death penalty guy but this is one of those events that suggests there might be a need.

UPDATE 3: Giffords is out of surgery. I hope she can recover as I think she has important things to teach many of us.

2 thoughts on “UPDATED:This could get ugly very fast”