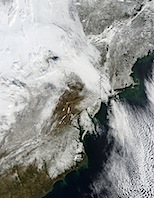 by NASA Goddard Photo and Video

People made their way through Times Square on Sunday evening as the Northeastern blizzard pushed into New York. (Photo courtesy of asterix611 via Flickr Creative Commons)

Global warming causes an increased chance of snowstorms like the one that has been pummeling the Northeast?

That was the red meat thrown out by the New York Times Christmas Day in an Op Ed column by Judah Cohen, director of seasonal forecasting for Atmospheric and Environmental Research. Not surprisingly, the climate contrarians are gnashing and feasting.

Cohen’s theory is actually pretty interesting. But I have no idea whether he’s right — and his theory is not the point of my post today. (If you’re interested in what other climate scientists have to say about it, check out Andy Revkin’s post today at DotEarth.)

Update 12/27/10: Deja vu all over again? Last February, there was snow in all 50 states, and frigid conditions extended all the way down to the Gulf Coast. I wrote about it in this article, and I mentioned that the Arctic Oscillation was in a particularly intense negative phase. When that happens, the Arctic tends to be warmer and lower latitudes tend to be colder than normal. Sounds familiar, doesn’t it? And guess what’s happening with the Arctic Oscillation right now? It has been in a persistent negative phase since November — and it reached quite a low level just eight days ago.

The picture above shows the snow on the ground after the Christmas Storm of 2010. Here is another nice one showing the cyclonic shape of the storm, explaining the very high winds seen along the coast. 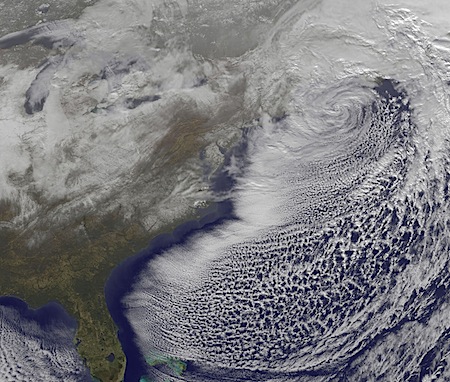 This was a nasty storm brought on by an Arctic phenomenon seldom written about, the Arctic Oscillation. When it is in a negative phase, the East Coast often gets some very cold weather.

I commented on the Arctic Oscillation the CEJournal mentioned last year, when the East got hit with a lot of cold weather. The AO was even lower this year: 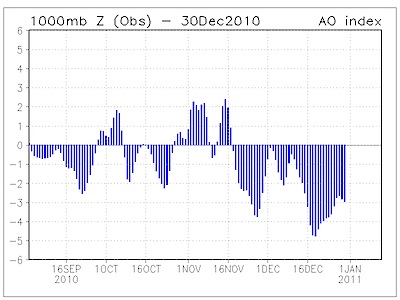 I think the East Coast should start looking at which phase the AO is in when deciding what the weather will be like. And, not surprisingly, Greenland temperatures are much warmer than normal, just like last year when the AO was negative.

Meanwhile, the West Coast is getting hit with a lot of rain. Climate change puts more water in the atmosphere. We are seeing this right now, with the moisture as snow where it is cold and as rain where it is not.

What people here may not be aware of is that parts of Australia are mostly underwater, after getting hit by a Tropical Cyclone. 400 cm of rain in 24 hours! Some of the largest rainfall in 150 years.

And this was after it had sustained its wettest spring in over 120 years.

The US is not the only part of the world seeing unusual amounts of precipitation.