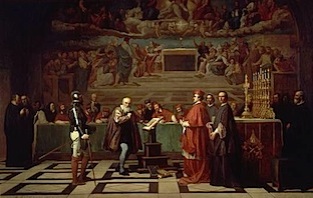 I’m happy to report that my alma mater, the University of Virginia, is not only fighting back against State Attorney General Ken Cuccinelli’s witch hunt against climate scientist Michael Mann, they are also being pretty clear about their protest:

In its most strongly-worded court filing to date, UVA characterized Cuccinelli’s investigation as “an unprecedented and improper governmental intrusion into ongoing scientific research” and said that Cuccinelli is targeting Mann because he “disagrees with his academic research regarding climate change.”

In other words, they’re saying this is a politically and ideologically motivated abuse of power, which I’ve been saying all along.

The use of legalisms and political intimidation against science seems to be part of humanity. When the natural world does not agree with political ideology, some attempt to criminalize the science. Like that will make the science go away.

The University has already expended almost $400,000 in this fishing expedition based on disagreement. This is one reason few scientists ever want to get involved in anything that catches a politician’s eye. Once that happens you ability to actually do the research you love is often severely curtailed. There has been a big push recently to try and get more scientists to engage the public with their research.

We can see here why they are hesitant. Go against an ideologue’s views and you can find yourself under investigation. In this case, the AG is supposed to state the actual false claim made. He can not just use the law to look for emails that might be used to bolster some sort of legal attack. The AG is supposed to know beforehand what crime was committed, not go on a general fishing expedition. As the University’s filing states, the AG is going after the researcher for work that was done in a different state at a different institution and that happened before the particular law he is using was even created.

He appears to have no idea of just what the scientist might have done while working in the state. He just wants access to emails and stuff from 10 years ago in order to hope he can do something.

How many of us would like the state AG to go through all of ou emails looking for something that, out of context, could be used for a nice trial?

Luckily, the scientist is not having to pick up the legal fees himself. Not everyone is so luckily when the state decides to use intimidation.

Galileo had it right. No matter what the ideologues try, it does not negate the science.Unfortunately, we do not have 400 years for them to see their error.