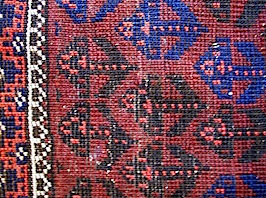 The Ground Zero mosque that used to exist
[Via AMERICAblog]

It turns out there was a Muslim prayer room on the 17th floor of the south tower of the World Trade Center, where Americans and other traveling Muslims prayed every day.

On September 11th, 2001, when a handful of terrorists flew planes into the towers, some of the folks who used the room evacuated in time. Others probably didn’t.

In other words, there already was a “ground zero mosque”–used by Muslim Americans who were murdered just like everyone else.

This is why the whole discussion is so stupid. There was a prayer room, one similar to the one that is being discussed right now in the Cordoba House project, in the South Tower. Read the NYT article which has interviews with Americans who used that prayer room every day. These are people who had friends die that day. Friends who were Muslim.

I would not be surprised to see that a prayer room was planned in the new tower that is being built on Ground Zero. And I would expect the same people clutching their pearls right now about the Cordoba House project will do what they can to prevent that from happening

Are they gong to stop Muslims from praying in the stairwells? Because, as was shown in the World Trade Center, they can do that also.

As Fekkak Mamdouh, former head waiter of the restaurant at the top of the World Trade center said:

Sometimes I wake up and think, this is not what I came to America for. I came here to build this country together. People are using this issue for their own agenda. It’s designed to keep the hate going.

[Update: The whole point of this post is that the World Trade Center had a prayer room and so will the Cordoba House Project (now called Park51). If one is going to be called a mosque, than the other one should be. Continuing to call Park51 a mosque, when it has been stated that there will be a prayer room in the community center, is misleading. Carrying this misleading information to its logical conclusion means that the World Trade Center should also be called a mosque. This makes little sense, as does continuing to call Park51 a mosque.

The important thing to remember is that Americans use these prayer rooms. Telling Americans where they should worship is pretty un-American to me.]