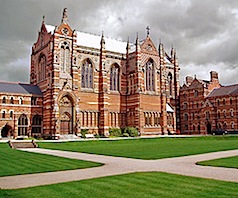 A free MIT science education? Yup, and Science loves it
[Via Ars Technica]

MIT’s OpenCourseWare, possibly the best place to go if you want to study physics in your pajamas, has been awarded the Science Prize for Online Resources in Education (SPORE) by Science magazine. OpenCourseWare receives close to 1.5 million pageviews a month, with traffic from educators, students, and especially independent learners.

The SPORE prize was created to honor innovations like OpenCourseWare, a site that makes much of MIT’s curriculum available to anyone with Internet access. It’s best known for the depth of many of its course resources, particularly in the sciences. Many classes, like introductory physics with professor Walter Lewin, include videos of all the lectures, as well as items like course syllabi and assigned readings.

The award gave OpenCourseWare’s contributors an essay spot in the magazine, which they used to note that 50 percent of the site’s visitors identify themselves as independent learners, unaffiliated with a university. This fall, OpenCourseWare will roll out a new section of the site geared toward independent learners, containing more problem-solving and self-assessment opportunities.

MIT OpenCourseWare is leading the way for high level science education online. They are available online or through iTunes, with both audio, video and transcripts.

The University of Washington is also one of the participants at iTunes U. In fact, there are a ton of Universities with free content.

Now we just need to get certification done right and the ability of people to re-train themselves becomes a possibility.