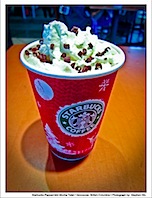 How about making better coffee?
[Via Doc Searls Weblog]

“Free Wi-Fi is in my mind just the price of admission — we want to create … new sources of content that you can only get at Starbucks,” chairman and president and CEO Howard Schulz told the Wired BusinessConference. “This is a thing that doesn’t exist in any other consumer marketplace in America.”

Starbucks hopes to make money from these initiatives indirectly, by “enhanc[ing] the experience” and making the content “so compelling that it drives incremental traffic,” said Schulz as he announced the new initiative at Wired’s Disruptive by Design conference on Monday…

Each customer must log in to Wi-Fi and the Starbucks Digital Network with a unique identifier, so Starbucks won’t only know where you are, but who you are, potentially allowing for targeted messaging to offset cost further. Focus groups have been quite receptive to the free Wi-Fi and local content customers will get in return, says the CEO.

So, where will all of this content come from? Especially, when Starbucks wants it to be updated multiple times a day, so people always see something new.

In addition to the inked partnership with Yahoo, Starbucks is talking to AOL’s Patch.com content-creation division about having it create customized content for the network. In addition, the network will include free online access to the Wall Street Journal, with a percentage of subscription revenue generated when coffee drinkers decide they want to access those articles elsewhere, too.

Salivating yet? Me neither.

The last thing I want from Starbucks — or any store, for that matter — is a target on my back. I do not wish to be tagged like an animal and tracked by marketers. The only identifier I want from Starbucks is the one I give them to call out when my coffee is ready. And that may not even be my name.

The free online access to the Journal is a nice deal, since the paper, both online and off, is freaking expensive. The “proprietary local content” is a big so-what. Sure, Patch.com is good at what it does, as is

I have found very few Starbucks worth sitting around in. Good coffee shops which encourage spending time sitting around offer a variety of approaches to help make one feel comfortable while browsing.

One is a variety of sitting options – chairs, stools, love seats – all give one a better feeling of welcome than a bunch of repetitious tables and chairs.

And electric plugs. Lots of them. I have yet to see a Starbucks with anything like a convenient number of plugs. You can not expect people to spend a few hours in you shop using their computers without providing power.

Doc also noticed something that is becoming more and more prevalent on the web – the appearance of Tynt as an unwanted traveller when cutting and pasting. Wired is apparently one of the sites now doing this.

It also annoys me that the Wired story lacks links to Patch.com and the Journal. It also forces me to copy this, even though it’s not visible in the story’s print:

I hate that. I also don’t know how Wired does that, nor do I want to take the time to know it, though I probably will, so I can hate it more specifically.

Tynt is a ‘service’ that adds the entire ‘”Read More…” that follows along with any text copied from some web pages. As noted, it is not something that is visible on the page but will appear when pasted.

Of course, it is irritating and is usually immediately deleted. John Gruber at Daring Fireball first put me on to this new attempt to utilize the habits of users for profit. He details a lot of what is wrong but I think this expresses his sentiment:

So it is great that he led me to a new Safari Extension that blocks Tynt-based scripts. I have returned to using Safari with the introduction of the new version. The ability to finally add extensions, plus the new Reader function, make me really happy. It is easier than editing my ‘hosts’ file to block the site.