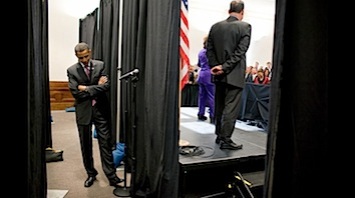 In 1860, Abraham Lincoln, in the heat of a Presidential campaign, before he was even a nominee for his party, spoke at Cooper Union, producing one of the greatest speeches in American History. It perhaps sealed him as the Presidential candidate. It dealt with the question of slavery.

But he gave it in front of a room of fellow partisans, of Young Republicans who were aching for a fight. And he gave them one. However, only those who could fit in the room actually heard him talk.

Today, President Obama returned to Cooper Union to give a speech that will likely not be seen as one of the greatest in history. Financial reform does not have the historical cachet as slavery. But he was also not in front of a ‘friendly crowd’.

The really big difference, the one that demonstrates how amazing our Age is, does not strictly arise from the President’s words. It comes from the way they are delivered to those interested in watching – through the Internet.

There were a ton of live feeds of the speech. C-Span, USAToday, almost every cable news program, and many others.

Even 10 years ago, you might only have been able to see the speech live if you were sitting in front of a TV and the channel made a decision to show it. If not, you were screwed.

Today, you can sit anywhere with a computer and actively seek those places that have a live feed. I found USAToday. You can carry on realtime conversations with your friends who are all watching the same thing.

Tomorrow it could be at the beach with an iPad or similar.

For me, the truly fun part and something few of us would have been able to do even 5 years ago, was to simultaneously follow what was written beforehand and what he actually chose to say. This is because the Internet also provided the speech as prepared for delivery.

It is very interesting to follow what the teleprompter is most likely displaying and what someone chooses to actually say. When you do so with President Obama, you find that the prepared speech is often more a set of guidelines than a rote presentation.

He changes words, he modifies sentences, sometimes he actually talks himself into a semantic corner, only to escape with a novel turn of phrase.

As an example, he replaced balance with kilter in this sentence:

There has always been a tension between the desire to allow markets to function without interference – and the absolute necessity of rules to prevent markets from falling out of balance.

Kilter evokes a much different sense than balance. One that I happen to like. But one he certainly seemed to add on the fly, as he did with so many of his changes.

Anyway, being able to watch the speech from the comfort of my work computer, where I can listen and do other things, or follow along when he gets to an interesting part, is truly an amazement of our times. Directly hearing someone’s words rather than having to f hear them filtered through someone else is incredible.