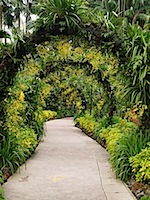 by wirralwater (where to next?)

For Photographers, the Image of a Shrinking Path
[Via NYT]

By the time Matt Eich entered photojournalism school in 2004, the magazine and newspaper business was already declining.

But Mr. Eich had been shooting photographs since he was a child, and when he married and had a baby during college, he stuck with photography as a career.

New technologies change everything. The make things that were scarce, plentiful.

The reduction in scarcity, something the digital age produces every minute, means that lots of professions will have to change. It used to be that only well-trained people could produce the sorts of photos required by the press. But, new technologies has now produced multitudes of photos that are almost as good, for a fraction of the price.

I use photos from Flickr that people license through Creative Commons. I almost always find a nice photo for the post. without having to pay a thing.

So, the need for as many professional photographers, at least with respect to media, is greatly reduced because of the explosion of possible sources.

To maintain a living, these professionals will have to adapt, creating new business models and finding ways to leverage their talents – there had better be a need for their talents or they will have to find something entirely different.

Figuring that out will be a journey that they have to make. Along with a wide number of us.