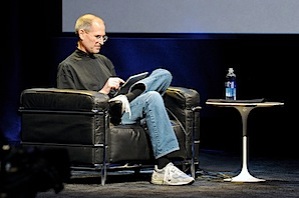 We knew today’s Apple tablet announcement was a big deal. We didn’t know, however, that it was big enough to bring the Internet to a near-standstill.

While Steve Jobs was discussing the highly anticipated iPad, IT workers across the country were discussing how to get their servers back up and running. And this time, it wasn’t just Twitter taking the nosedive.

I saw this firsthand. So many sites just went down hard during the event. Engadget and Gizmodo held up the best but even those required some futzing (usually forcing a reload of the page). Luckily both recovered and, at least for me, neither was down at the same time.

Poor Cover It Live, which is usually quite a fun way to see a live blog, was hammered for every site that tried to use it. BUt, it will be because of events like today that these groups get a better handle on actually providing such peak coverage of breaking events. Perhaps for something with real importance and not just an Apple announcement.