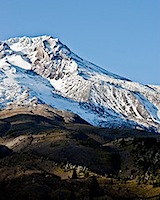 It’s full speed ahead on developing a plan to supply water for fish, farmers and cities in the Yakima River Basin in the decades to come. Three Central Washington counties – Yakima, Kittitas and Benton – have all now committed to continue the planning process after six months of work appeared on the verge of being scuttled.

My previous post discussed changing rainfall patterns in the US over the next 80 years or so, with the Pacific NW getting large amounts in our mountains. Well, eastern Washington is already looking to manage water by filling reservoirs, etc. But I thought the last paragraph of the article was off somehow:

The three-county basin relies on snowpack — commonly referred to as the sixth reservoir — to supply early-season irrigation water. The five existing reservoirs hold less than half of what is needed annually.

Snowpack provides more than half the water needed annually. So they had better hope the snowpack does not disappear or that the glaciers on all the mountains remain. Otherwise that 6th reservoir will not be available.

I would imagine that they will simply build more reservoirs to hold the water. We may not be able to rely on cold weather holding our water for us but we can probably figure out ways to retain what we need.

[Listening to: Help Me Girl from the album “The Animals – Retrospective” by The Animals]