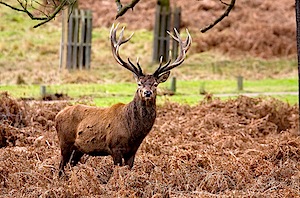 Scotland’s wild red deer are changing shape due to breeding with a foreign species, a new study finds.

Researchers previously found Japanese sika deer, brought to the country in the 19th Century, have bred extensively with native deer.

It was unclear then how crossbreeding would affect the species.

In many ways, diversity followed by natural selection is a major driver of evolution. These are two opposed processes. Natural selection tends to drive the genes of an organism towards ‘the best’ fit for the environment. Taken to its extreme, all the organisms would essentially be the same but be highly evolved to survive a particular environment.

But this is death to the species if the environment changes. Think koalas without eucalyptus. So a species also needs to have a diverse genome in order to provide the possibility to adapt to a new environment and allow individuals survive.

Reaching a balance between the solitary genomes superbly fit for a particular environment and diverse genomes fit for a possible range of environments is a constant ballet for any species.

In this case, a novel species was added to the environment in Scotland and, instead of disappearing or overwhelming the extant species already present, it has coexisted. More than coexisted, it as mated allowing gene flow to occur and increasing the possible diversity of both species.

Instead of just one form of deer, there are now four: red, red-like, sika-like and sika. The deer now can deal with the environment in different ways due to this diversity. Depending on the environment, this may drive one form to greater success, produce two different species for two different environments or remain as a range of hybridizations.

Thus the red deer actually now has a greater probability that their genes will survive in some form than as a single, less diverse species. The species has a better chance of surviving in some form.

To my mind, this is a better result than the extinction that often happens when a foreign species is introduced. It will be interesting to see what develops.

[Listening to: I Am A Rock from the album “Collected Works (Disc 1)” by Simon & Garfunkel]

One thought on “Maybe not a bad thing”