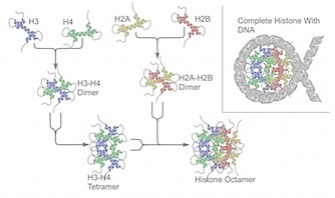 US scientists say they have discovered an antibody that could minimise the damage caused by major traumas.

Histones are necessary for proper packaging of the very long chromosomes in the very small nucleus. They are also important in controlling gene expression. But I have to point out an error in the report that makes me want to search out the real paper.

It regulates the DNA, causing it to fold and form the characteristic double helix.

Histones have nothing to do with DNA and the double helix. DNA forms that structure by itself. Histones deal with higher oder packing of the DNA as it wraps around the histones.

So let’s look at a couple of other reports, as this BBC one has lost ,y confidence that it is reporting accurately. ScienceDaily gives us the actual press release, which does provide some better information.

Histones released from dying cells damage the lining of blood vessels. this may be the cause of some of the major problems we see following various traumas – internal bleeding into the surrounding tissue.

In fact, this sort of damage is what drives things such as sepsis. Sepsis can kill very rapidly, often from the huge response the body makes to try and fix things.

Few things have been found to be very effective against sepsis once it gets going. It can kill very rapidly and most of the therapy is palliative in nature, keeping the patient alive long enough for their body to deal with the damage.

An antibody therapy would be pretty straightforward. Infusion with the antibody would soak of the histones and thee damage they do would be reduced.

If this actually helps in a meaningful way, it could be a real breakthrough. Let’s just see what happens in humans.

To me, the really amazing fact is that histones do so much damage. I wonder just what the mechanism is. I’m waiting for this to turn up on CSI – the victim was injected with large histones which mimicked sepsis, resulting in the death of the victim.