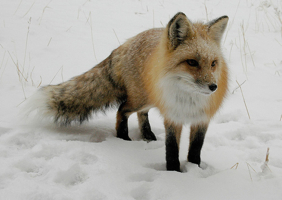 Mice carrying a “humanized version” of a gene believed to influence speech and language may not actually talk, but they nonetheless do have a lot to say about our evolutionary past, according to a report in the May 29th issue of the journal Cell, a Cell Press publication. “In the last decade or so, we’ve come to realize that the mouse is really similar to humans,” said Wolfgang Enard of the Max-Planck Institute for Evolutionary Anthropology. “The genes are essentially the same and they also work similarly.” Because of that, scientists have learned a tremendous amount about the biology of human diseases by studying mice.

The gene in question, FOXP2, has been implicated in a series of events that happened after we split from the chimp lineage, particularly language development. Mice with only one copy of FOXP2 vocalize much less than normal mice.

Now, those with humanized copies have altered vocalization and also show changes in the the regions of the brain associated with language. While the reasons for this altered protein to affect language are not defined yet, there is some belief that it may be due to enhanced muscle control to produce sounds.

Also, it will be important to see where and how the humanized form of the gene is expressed in mice. It may be the same gene but its expression patterns may be different, thus hampering its utility.